Best Camera for Travel for 2020

It is quite natural that all your favourite photographs were taken while you’re on a holiday, or travelling. Therefore, it is the only reason why you want to have the best Go Pro camera for capturing all the precious moments that will remain for a lifetime.

These days the camera market has a robust competition, where different options are available to suit your desire according to your needs and experience.

If you are in search of a vlogging camera that you can use while travelling, you have come to the right place, because in this guide you will find the best GoPro for travel and 4k action camera.

What camera should I buy for Travelling?

Wondering which GoPro travel camera to buy? Well, it’s not that simple, because GoPro have different camera models and each of them has their strengths and weaknesses. The latest models will have rich features, but they will cost higher. Whereas, older models still work better with great features and has an affordable price.

Hence, it will be better if you familiarize yourself with some of the models before opting to buy one. All these models have great features such as image stabilization, 4k video processing, and so on. Here are the top 5 travel cameras that will capture stunning images.

The Hero7 was launched in 2018, but still, the camera offers a lot of features at a decent price. You can buy this camera because it’s pretty amazing, and it had a price cut. The HyperSmooth technology works effortlessly that enables the camera to capture stable footage.

It can shoot 4k video at 60 fps, and 1080p videos at 240 fps for an awesome slow-motion. It is equipped with advanced digital stabilization for capturing smooth and crisp images despite shakes or vibrations.

Now you don’t have to worry about taking pictures while you are on the move. Compared to the older versions, the image quality is much better and natural. Thanks to its new and upgraded GP1 processor which enables these features on the Hero7.

It is equipped with a 1220mAh battery, and waterproof up to a length of 10 meters. Other features include voice commands, Bluetooth, and Wi-Fi. You can control the device by using the buttons, or the touchscreen. 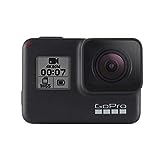 The GoPro 8 is the ultimate action camera and the latest flagship in the GoPro model. The company enhanced the camera’s capabilities and launched it with a more practical design. It’s a little bigger and heavier than the other versions.

If you buy this camera, you will be able to get a redesigned exterior with 3 different port layout for add-ons, which will be a perfect vlogging camera. You can connect 3 mods to the camera, such as an LED light, a shotgun microphone, and a display. This setting comes handy while shooting in darker environments, where you can see yourself, and to record better audio.

As you can expect, the camera is waterproof and has the ability to shoot with different resolutions at different frame rates up to 4k resolution. The HyperSmooth has also been enhanced for incredible video performance. The new HyperSmooth 2.0 will ensure smooth image capture at all resolutions and frame rates.

The best budget camera among the various models of the GoPro Hero series. The device was launched in 2016, and now you can buy it at a cheap price. This unit has a video stabilizer that will save you from taking any blurry images while travelling.

The build-in mics actively reduce the wind noise so that your video captures will be freed from unwanted noises. It can shoot videos at various resolutions and different fps. However, the 4k video recording can be done only at 30fps, and the slow-motion videos at 120 fps.

The GoPro 5 connects with the mobile app, and compatible with QuikStories. There are various shooting modes such as burst mode, photo, night mode, time-lapse photo, looping, etc. other features include Wi-Fi, Bluetooth, voice control, waterproofing up to 10 meters, GPS, stereo audio.

You can take advantage of the voice control for taking pictures or shooting videos. The GoPro is pretty advanced with rich features, and it’s cheaper and affordable. You must consider buying this camera because it has features that will satisfy your needs. 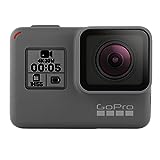 The most remarkable feature of the GoPro Max is the fisheye lenses, which are mounted on the front side and backside of the camera. It has the capability of shooting in all directions which include up and down as well. It’s arguably the best 360-degree action camera available in the market.

You can shoot images from any of the two cameras, and it provides better image stabilization than the other GoPro models. Equipped with HyperSmooth technology, the camera uses the ultra-wide lens to level the horizons, so that you can have great footage.

The GoPro has a better mic system that consists of 6 in numbers for a 360-degree sound effect. You can shoot footage using both the cameras in 360 that will result in a 5.6k resolution frame at 30 fps.

You can make use of the TimeWarp feature which allows you to take a slow or speed footage while panning in 360-degree. If you are a YouTuber or a Vlogger, the GoPro Max will surely enhance your creative skills.

If you are considering features that might be useful while travelling and having a low budget, the GoPro 6 is the best bargain camera you will ever find. With the advanced GP1 chip, you can shoot footage at a resolution of 4k at 60fps, and a 1080p with up to a low as 240fps.

You can also take advantage of the voice control for a hands-free experience. The camera has a GPS functionality and an audio processing unit that captures stereophonic audio. For still images, you will have a 12 megapixels lens that captures in RAW format, which allows for better post-processing at your computer.

The camera has an inbuilt HDR technology for enhancing details in low light and shadows at a burst speed of 30 fps. This camera has a touchscreen LCD display, and you can use it under the water up to 10 meters depth without extra housing. Equipped with better image stabilization, the GoPro 6 is a great action camera that comes at a bargain price.

Which camera is best for travel videos?

When it comes to capturing videos while travelling, the GoPro action cameras will meet your requirements. But why a GoPro travel camera, and not a regular camera? That’s the obvious question you might have in your mind.

First of all, ordinary cameras are not popular at recording videos at high frames, and they are a bit bigger, unlike an action camera. You must have seen footages where someone jumps from an aeroplane or doing adventurous manoeuvres on a snowboard.

Those were recorded on an action camera, and whatever you do on a vacation, like climbing, swimming, scuba diving, or hiking, you will definitely want a GoPro camera to make those moments very special. Hence, a GoPro camera will be best for shooting videos while you’re travelling.

Is GoPro a good travel camera?

One of the important features of a GoPro camera is its small size. This device has a smaller height and length so that you can hold it comfortably in your hands when you are traveling. It will capture spectacular still pictures and stunning videos with a GoPro action camera.

Apart from this, the device is very handy and you can easily carry anywhere around. The integrated casing protects the camera from water and sand, which makes it perfect for using it on beaches, near the sea, swimming, and on ski slopes.

The GoPro camera has a wide-angle lens that can take amazing panoramic images and remarkable selfies along with the gorgeous landscapes that are behind your shoulders. The camera is equipped with Wi-Fi so that you can control it with a remote, and you can also download the images and videos to your smartphone directly.

Can a GoPro replace a regular camera?

The answer is, yes. The first and important feature of a GoPro camera is there are small, and they get fitted in your pocket. Hence there will be no trouble in carrying them on your luggage which will save you some space.

The GoPro camera is rugged, which means they can be taken anywhere. Whether you’re on a beach or water, or you’ve gone to a place during monsoons, a GoPro camera will handle all these things without any sweat.

Although the point and shoot options aren’t perfect for all situations, they work remarkably well on a broader spectrum. These cameras are even capable to capture images in the night and low lights. They have an ultra-wide-angle lens with a fisheye look as well.

The wider look is wonderful for capturing bigger subjects, or you can get closer to the subject for taking the shot. It creates a great immersive look that resembles an action shot. If you want to capture the dome of a cathedral underneath it, or to capture cramped quarters in the lifeboat of an Antarctic expedition, a wide-angle lens will serve better for these purposes.

Make sure that you need to get closer to the subject while capturing in a wide lens, or else the images will be pretty smaller in the frame. If you feel that some images are better than the fisheye effect, you can even remove them in post-processing.

Which GoPro is the best for travelling?

While capturing videos during travelling, you will look less on the rear display than shooting action scenes. However, if you want to check the exact framing for the videos or images for an edit, you must opt for a GoPro camera that has an LCD display screen, like the GoPro Hero5.

Silver or a black GoPro 5? Well, it doesn’t matter most. Buy any colour of your choice, because every feature in both the devices will be the same, apart from the colour. Hence, if you want a buy a GoPro travel camera for taking amazing videos and pictures, I’d recommend you to buy the GoPro Hero5, which has an integrated mode for video stabilization.

There are many variants in the GoPro series that are available at different prices, and your choice might depend on your budget. GoPro 5 is a budget camera that you can buy for a decent price. I know that if you’re going to buy a GoPro, then you must be prepared because you have to spend some money.

The feeling of making videos or taking pictures underwater is mesmerizing, and the GoPro cameras will serve this purpose much better. It won’t matter whether you are a cinematographer, or just getting started to experience the underwater image-making.

GoPro cameras are the ultimate devices for creating underwater moments that will last for a prolonged time, rather than the ordinary B-roll cameras. The wide field of view in the GoPro will allow you to take amazing images of underwater creatures. GoPros are waterproof, but it’s recommended that you use housing to protect your camera further.

Keep in mind to set your desired camera preferences before going in the water because you can’t use the screen display as it will be housed underneath the extra casing. You can use the camera while swimming or snorkelling, without worrying about any water spillage on it.

Although capturing images underwater will need some capabilities and skills, especially with the camera settings, but rest assured the GoPro travel camera will help you to learn underwater photography techniques.

Photo by Tom Fisk from Pexels

As long as you work on the limitations of your action camera and use it to its strengths, you will end up taking some amazing footage of your adventures. Ultimately it will come down to measure up what’s important for you in an action camera and buy the exact one.